A podcast about researching stuff you never remember to look up 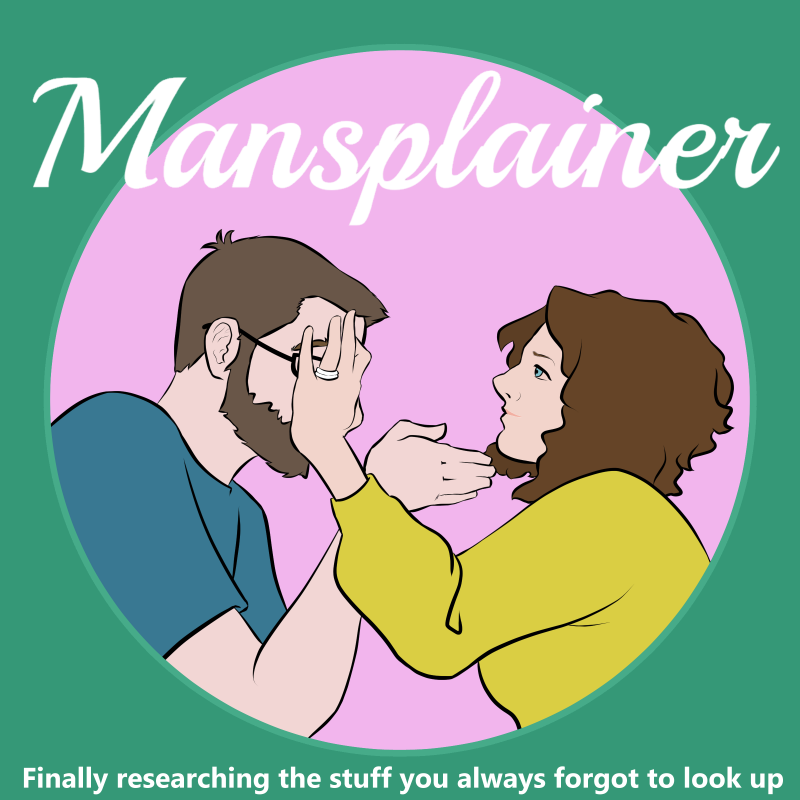 We tested our new equipment, and what the heck, you get to hear the beautiful new audio quality while we're working on our next episode. 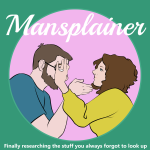 We tested our new equipment, and what the heck, you get to hear the beautiful new audio quality while we’re working on our next episode. Transcript at https://podcast.unwieldylocutions.com/podcast/bonus-episode-jeopardy/

SPENCER: Yeah. Ohhh, these waveforms look so much better, Patti.

PATTI: I don’t know what any of that means.

SPENCER: It just–it looks so much better.

PATTI: I was trying to think of a thing I could ask you, just off the cuff. I thought it’d be funny. I had a question earlier, while we were being lumberjacks, but I can’t remember it.

SPENCER: [laughs] I did bring Jeopardy! if you want to do this week of Jeopardy.

PATTI: Oh. That’s Arizona, not California. Those Bradys, they mislead me.

SPENCER: The Bradys were wrong?

PATTI: Well, they weren’t–no, they weren’t wrong. I think just that when I was little and I watched the show and they went to the Grand Canyon, I knew that they lived in California, I didn’t realize that they had driven to Arizona. And so it wasn’t until I saw the license plates in Arizona… [groan] I grew up on the east coast. We just did not talk about the west. It was too new. What? What are you doing to me?

SPENCER: You’re getting close to clipping.

PATTI: But I didn’t.

SPENCER: You didn’t, but if you really, like if you get louder than that during a recording, um, it might.

SPENCER: Like, it won’t be the end of the world.

SPENCER: All right. State nicknames for 600. The Garden State.

SPENCER: It really is.

SPENCER: Did I ever tell you about my weird relationship with that movie?

SPENCER: So. The ex had to watch it for a film class.

SPENCER: And I watched it with her.

SPENCER: And she was being really shitty about that movie.

PATTI: And you decided to like it to spite her? [laughs]

SPENCER: No, no…but she was being really shitty about something specific about it, and I was like, “well, no, I mean, like this aspect isn’t even actually super–”

PATTI: I mean, I haven’t watched it in a long time.

SPENCER: There’s no reason to. [mumbles]

SPENCER: I was gonna say, I’m gonna go with Robin’s.

PATTI: I feel like Kansas should be something about tornadoes, but go on.

SPENCER: Oh! No. This is wrong.

PATTI: [laughs] Is it one of the Dakotas?

PATTI: Oh. Mm. Mh-mm. I lived there. I feel like I would have known that.

PATTI: No. Mm. Prairie State, that’s a bunch of–go on.

PATTI: Show me the wayyyy. No?

SPENCER: “Cover me with kisses, baby, cover me with love,” is a line in this Blondie song.

PATTI: [laughs] That was a real face journey over here. [laughs]

SPENCER: Carly Rae Jepsen personally okayed Holden Nowell as the costar of the video for this song. I’m gonna assume Call Me Maybe.

PATTI: Call Me Maybe. I don’t know who that is, though.

SPENCER: Yeah. No. It’s like Carly Rae Jepsen! I don’t know who this is.

PATTI: Is he one of those One Directioners, perhaps?

SPENCER: That doesn’t ring a bell.

PATTI: I think I only know two of their names. There’s the one with the hair, and his name is Harry, which just makes sense, and then there’s Niall, and I know him, because I know someone whose husband’s name is Niall, and I never knew how it was pronounced until I knew her, and I finally just said, “how do you say your husband’s name? because I read it, and I don’t know.”

SPENCER: There is the, uh, controversial figure of Zayn Malik.

PATTI: Ohhhhhhh. I forgot about him.

SPENCER: People are really torn on him. They’re either real into him, or they’re very opposed that he left.

PATTI: Huh. I thought they broke up, anyway. Or are they on “hiatus?” Much like N*Sync. I believe N*Sync is still on “hiatus.” Yeah, because remember Justin Timberlake needed to do solo work, so they–they didn’t break up, though, Spencer, don’t worry, they’re getting back together any day now.

SPENCER: I thought they were still doing–I don’t know. Tumblr–the problem with tumblr is there are no dates on anything, so I have no idea what’s current.

PATTI: I mean, I could see N–no, I don’t think N*Sync is doing anything. Oh, do you mean One Direction?

PATTI: I think it’s really interesting that that Zayn one is the who, like, broke out on his own when Harry Styles was like the, the Justin Timberlake. At least, I dunno. Like, I have never really been into boy bands, so this is fascinating for me. I should have been into New Kids on the Block, but I moved. Like, right around the time all of my [laughs]

SPENCER: All right. That was really confusing for me.

PATTI: So, the thing about girls is we kind of travel in packs when we’re in grade school and middle school. To a certain extent, depending on who you are, a little bit in high school, too, I guess. Um, but we moved from Pennsylvania to Maine in the fifth grade, when I was in the fifth grade, and that’s right when New Kids on the Block was starting to get really popular, and I think if we hadn’t left and I had maintained my friend group, I might have been more into them, but instead I had to reestablish all kinds of friend groups. I kinda missed–

SPENCER: Oh, you missed the window.

PATTI: I missed the window, and I just never got into them, and I was just a little too–although, I had friends who were super into the Backstreet Boys and N*Sync, I felt I was a little too old for that, and I was, like, taking a sharp left turn into Indigo Girls/Sarah MacLachlan Land with some Mighty Mighty Bosstones. It, like, I had, I had gone in a distinctive direction by that point, and I was looking at people who listen to the Backstreet Boys like, “you listen to garbage.” I wouldn’t be that judgmental now, but when you’re 18 years old, and the only thing that’s good is what you like. You keep turning me down.

PATTI: Well, I think that you’re a bully.

SPENCER: I just want everyone to hear the full range of your beautiful timbre. Timbre.

PATTI: Well? Y–mm–all right. Go ahead. [laughs] I’m gonna clip you in about two seconds. I’ll beat you to death with this mic stand.

PATTI: “How did he die?” “He was impaled with a mic stand. He had the little spring wrapped around his throat.” [laughs]

SPENCER: What’s upsetting is I kinda buy that. Me tunes for 2000. This John Legend love ballad dedicated to his wife was the second best-selling song of 2014 in the US.

PATTI: I don’t know. They can’t just ask me who his wife is, because I love Chrissy Teigen.

PATTI: And I like John Legend. I just…don’t know. I’m gonna hear it, and I’m gonna be mad, because I should know it, but go on. Oh, it has the word me in it. I got nothin’.

SPENCER: Yeah. Me and You. I have no idea. Ah! All of Me. If I’d, if I’d stuck with the basic crap formula, I might have pulled it.

SPENCER: I would assume an original.

PATTI: Okay. He is a jazz artist.

SPENCER: I mean, like, well, yeah. I am not a John Legend expert, I have no idea.

PATTI: They may be my favorite celebrity couple

PATTI: Well, they do good things. Okay, go on.

SPENCER: Who’s a contender? Oh, you know what? You really like Megan Mullally and–

PATTI: I do. And Nick Offerman. They make me happy. [sigh] Okay.

SPENCER: All right. And today’s.

PATTI: Oh, did I not clip with my sigh, you don’t have to turn my little knob down again? [whispering] I just…you…

SPENCER: Physical science! Shorter than radio waves, this type of useful radiation has a frequency of 1 to 300 gigahertz.

PATTI: [whispering] gamma rays [laughs] I don’t know. I feel like Petie’s gonna be real disappointed in me.

SPENCER: My initial thought would be microwaves, but–

PATTI: Oh yeah, I bet that’s it. Is that why it goes hommmmmmm?

SPENCER: No, that’s the–

PATTI: [whispering] what are gamma rays?

PATTI: I used to know, and I shoved it out of my brain–

SPENCER: Gamma is the super high energy one.

PATTI: –to make space for, like, TV theme songs.

SPENCER: Well, the reason I’m confused is I though visible light was in the megahertz, which would make this frequency, like, way higher than that.

SPENCER: I know too much to be good at this.

SPENCER: No, it is microwaves. I was just real wrong about the wavelengths–the, the

PATTI: The order? The power ranking?

PATTI: All right. Go ahead. See how it sounds.